When a collector drops off his two HJ47 Landcruiser Ute’s and asks for the original trays, who are we to say no.

Turns out some of our fabricators remember making these trays back in the early 80’s.

Given TL Engineering is about to turn 50 Years young, many of our fabricators are still working for the company and relished in the chance to return to the old days and weld “art” into what could be seen as just another steel tray.

One of the utes will be returned to the famous WA Red & White Auxiliary colour scheme and the other is the Fire Chief ute in Sandy Taupe.

This before and after photo shows the raw utes on arrival to TL Engineering, the after image on the bottom is from the day of handover with the trays returned to their former glory.

Keep your eyes out for the Auxiliary Ute due to appear at the upcoming Newdegate Field Days 2019 September 4-5th. 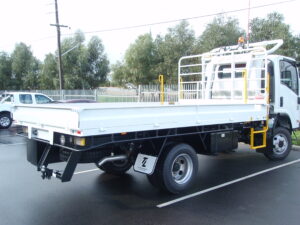 You need a heavy duty truck tray in Perth - you have come to the right place! A customer recently… 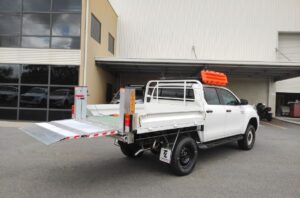 Buy new made in Perth high quality tail lifts for utes and trucks for sale at affordable prices. Custom designed… Australia has maintained its position as the largest market for Toyota Landcruiser, with Queensland and Western Australia leading the way.…

Continue Reading
We use cookies on our website to give you the most relevant experience by remembering your preferences and repeat visits. By clicking “Accept All”, you consent to the use of ALL the cookies. However, you may visit "Cookie Settings" to provide a controlled consent.
Cookie SettingsAccept All
Manage consent

This website uses cookies to improve your experience while you navigate through the website. Out of these, the cookies that are categorized as necessary are stored on your browser as they are essential for the working of basic functionalities of the website. We also use third-party cookies that help us analyze and understand how you use this website. These cookies will be stored in your browser only with your consent. You also have the option to opt-out of these cookies. But opting out of some of these cookies may affect your browsing experience.
Necessary Always Enabled
Necessary cookies are absolutely essential for the website to function properly. These cookies ensure basic functionalities and security features of the website, anonymously.
Functional
Functional cookies help to perform certain functionalities like sharing the content of the website on social media platforms, collect feedbacks, and other third-party features.
Performance
Performance cookies are used to understand and analyze the key performance indexes of the website which helps in delivering a better user experience for the visitors.
Analytics
Analytical cookies are used to understand how visitors interact with the website. These cookies help provide information on metrics the number of visitors, bounce rate, traffic source, etc.
Advertisement
Advertisement cookies are used to provide visitors with relevant ads and marketing campaigns. These cookies track visitors across websites and collect information to provide customized ads.
Others
Other uncategorized cookies are those that are being analyzed and have not been classified into a category as yet.
SAVE & ACCEPT